Subject Line: It would be enough to break your heart

The first time I played the modern defence in a league game, the game opened (my opponent was rated 1505):

And then I blundered with

In this position, white can get a clear winning advantage with 5 Bxf7.

And, if black plays 5… Kf8, he’s a pawn down, he can’t castle, has huge weaknesses along the a2-g8 diagonal and the f-file, and will have to give up more material to avoid checkmate.

In fact, in one game, after 5 Bxf7, Russian IM, Vladimir Zhelnin (2490) immediately resigned.

Fortunately for me, my opponent missed the combo. Instead, he played 6 o-o. And, after 6… e6, the opportunity had gone.

Even worse for white, by move 20, I had an easily won position.

What could have been…

Bxf7 is a common tactical motif in these positions. If white had known it, he could have won the game within 10 moves.

He’d have gone back to his club as a hero – able to add an attacking minature to his collection of wins.

And me? I’d have to live with the humiliation… and the guys at my club snickering behind my back…

How to sharpen your tactical awareness

There are countless motifs like these in chess. Any one of them, if you spot it, can be the difference between a quick win or a long slog.

That’s why GM Ronen Har Zvi created his popular  Chess Tactics for Everyone Courses. They teach you how to identify the right tactical ideas in your own games and, even more important, how to execute them correctly.

For example, take this position (White to move): 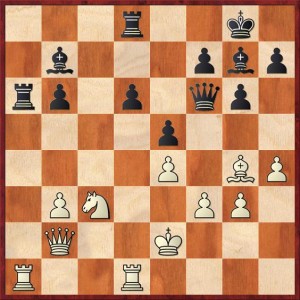 You might have noticed that black’s queen has only one square at her disposal (e7). So, Nd5 would win the queen IF the black bishop wasn’t protecting d5.

You also see that the bishop is defending the rook on a6. So we have an overloaded piece.

The correct solution is 1.Nd5, winning the exchange after 1…Bxd5 2.Rxa6.

With this free preview of Chess Tactics for Everyone Courses you will learn how to recognize the crucial defender of your opponent’s position, how to remove (or deflect) it and take advantage!

This will help you think like a real tactical monster – do this every time and you’ll  never miss a tactic again!

Want to be a tactical expert, master all the main tactical motifs and find tactics in your own games? Check out Chess Tactics for Everyone Courses.

PS Richard Teichmann (one of the best players of the 19th century) famously said “chess is 99% tactics”.

I don’t know if I’d go that far. But, in the error-strewn world of sub-2000 ELO chess, there’s nothing that will pile points onto your rating faster than mastering key tactical patterns.