Subject line: How Darth Vader can help your opening prep

When I came back to chess in my 40s, I found I struggled to remember opening theory.

I get it, our memories get worse as we age, but that doesn’t change the fact that, if I couldn’t remember opening lines, I was going to be at a big disadvantage. (Especially against younger players.)

Fortunately, I found someone to help me…

His name is Joshua Foer.

Joshua went from having an average memory to becoming the U.S. Memory Champion – in just one year! He wrote about this journey in his book Moonwalking With Einstein.

I took his methods and adapted them to memorising opening theory.

In particular, a technique called the “Memory Palace.” This is the technique memory champions use to memorise a shuffled pack of cards in under two minutes.

Here’s how it works…

I imagine taking a journey – based on a real location you know well – where you encounter strange characters.

Let me give you an example …

Darth Vader on a Merry-go-round

I often play the French Defence as black. And one of the most common lines I face is the Advanced Variation.

For me, the locations I use for the Advanced Variation are in Montmartre in Paris. (I used to live in Paris, so I know it well.) 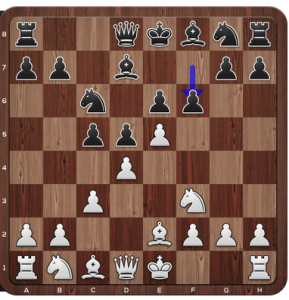 … I find myself in Place Saint-Pierre, looking up at the Sacre Coeur cathedral. In front of me is a merry-go-round. And, on the merry-go-round, sitting on one of the horses, is …. You guessed it, Darth Vader!

How to get my complete memory system …

You could use memory techniques to develop your own system. Or, you could let me save you time by showing you my system in detail.

* The exact system I use to memorise opening lines 25+ moves deep – even when there are dozens of sub-variations to learn.

* The right way to remember ANY move or capture – including en passant and positions where two identical pieces could move into the same square (usually notated like Ngf3 or Rad1).

* Why “remember the principles, not the moves” might be good advice for GMs, but is terrible advice for the average player.

* What to do when your opponent could choose from multiple moves.

* What to do when your opponent deviates from the lines you memorised. (And why your memorisation will help you find the best reply.)

No need to shy away from your favourite openings because they have sharp sub-lines. Play the openings YOU enjoy playing.

And no more rote learning – it’s boring, time-consuming, and doesn’t work. These proven memory techniques work faster and better because they use your WHOLE BRAIN.

Normally, we sell this ebook for $37. And, given it’ll save you dozens of hours in opening prep – and give you more wins over the board – it’s a bargain.

But, today, we’re knocking it down to almost half price.

P.S. One of the added benefits of the Memory Palace method is that you can review your opening theory anywhere.

You don’t need a chess set. You can be standing in line at the Post Office and running through your favourite defence against 1d4. It’s a great way to use your downtime.