After the loss to the Jets on Sunday, pundits were quick to criticise Bill Belichick, after the Pats coach elected to kick off at the start of overtime.

On NFL.com’s flagship podcast, “Around the NFL“, Gregg Rosenthal said, “It’s crazy to risk the chance of Tom Brady not seeing the field”.

ESPN’s Rich Cimini called the decision “a gift” to the Jets.

In this post, I’m going to argue two things:

#1: Rosenthal, Cimini and all the others are using faulty thinking.

#2: Belichick probably made the correct decision.

Why the critics are wrong

Why are they wrong? Because they’re confusing decisions with results. Let me demonstrate by inventing a game… 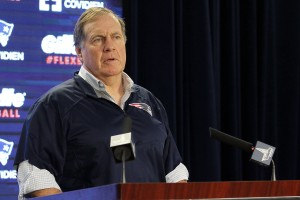 Bill Belichick shares a joke with the media

The rules: the player guesses “lows” or “highs”, then throws the dice. If he’s right, he wins. If he’s wrong, he loses.

So, if you’re playing, the only correct choice is to call “lows”. You’re twice as likely to win than if you guess “highs”.

What happens if, on your first roll, you call “lows”, but you throw a 5? Did you make a “bad decision”?

No. You made a correct decision, but got an undesirable result.

A sample size of one

You got an undesirable result. But that was a sample size of one game.

That’s because, as the sample size increases, results tend towards the expected outcome.

Belichick’s decision also has a sample size of one – and will only ever have a sample of one, because these exact same two rosters will never again play this exact same game.

Why Belichick Was Probably Right To Kick

Before Sunday’s overtime coin toss, the equation was simple:

If the Patriots received the kickoff, there was an X% chance they’d win.

If the Patriots chose ends and kicked off, there was a Y% chance they’d win.

What Belichick had to do was estimate which was larger, X or Y.

And don’t you think that Belichick – maybe the greatest football strategist of all time – is more than 50% likely to have guessed correctly?

This flawed logic is everywhere

The, “The decision didn’t work out, so you made a bad decision”, argument is a common logical flaw in the media.

(The “worst call ever” tag from last season’s Superbowl was, I hope, “peak stupid” for this style of thinking.)

And, in business reporting, we often see the flipside: survivorship bias.  An entrepreneur who made a series of foolish decisions, but survived and went on to success, believes the bad decisions were good.